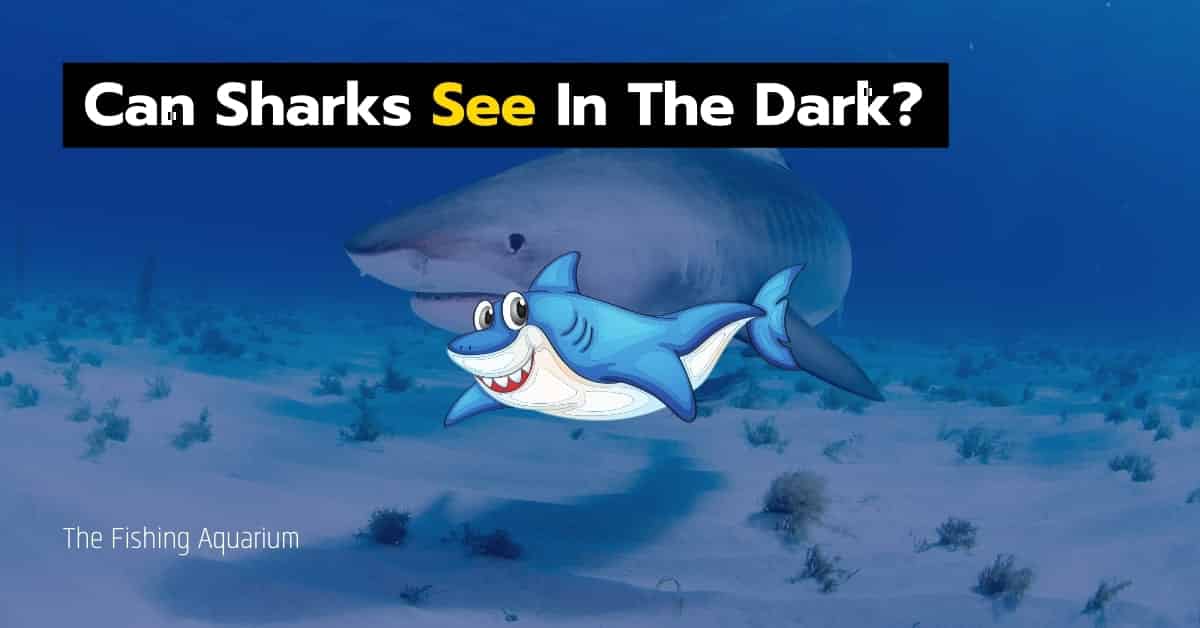 Ever wonder can sharks see in the dark? This is a question many marine life enthusiasts and scientists have been asking for years. Sharks can sense danger, even if they can’t see it. Their senses of smell and hearing are very good tools that help them find food, avoid predators, and keep themselves safe from harm. In this article, we will discuss 7 amazing shark eyesight facts about their eyesight both during daytime as well as at night!

In case you are in hurry and have no time. We have an on-point answer for you.

Can sharks see in the dark? Yes, sharks can see in the dark. While some shark species can’t see as well during nighttime or darkness as others can, they do have a vision that is somewhat adaptable to their environment and surroundings. Sharks can also sense danger even if they can’t always actually “see” what’s causing it.

Can Sharks See In The Dark? Here’s The Answer

Sharks can see in the dark. Sharks can sense danger in the dark by using their senses of smell, hearing, and electrical signals that all living things emit. Some sharks can glow or light up with bioluminescence to attract prey at night. The shark’s eyesight is good both during day and night time but they can’t see color.

Sharks can’t focus their eyes, they can only detect moving objects and prey in front of them.

Sharks have amazing eyesight that can sense even the tiniest movement or vibration around them with special cells called  “rods”. The rods are more sensitive to light than cones which enable sharks to be able to see in the dark.

Sharks can see in front of them well but can’t focus, they can only detect moving objects and prey. They have a special organ called the “Tapetum lucidum” which reflects light back through their retina, giving it extra clarity at night time as the shark’s eyes are adapted to low-light vision.

How Do Sharks Sense Danger In The Dark?

Sharks can sense danger in the dark by using their senses of smell, hearing, and electrical signals that all living things emit. Sharks can hear low-frequency sounds over long distances with special sensory organs called “Ampullae Of Lorenzini”.

The ampullae are jelly-filled canals located on a shark’s snout which detect changes in electric fields and can sense prey. Sharks can also smell through their nostrils or the “Nares” openings on their snouts with special sensory organs called “Jacobson’s Organ”.

These canals are connected to a shark’s mouth and throat which detect chemicals given off by potential predators such as blood, fish mucus, and oils from the skin.

Do Sharks Attack At Night?

Sharks can only hunt during the day. Sharks are not nocturnal hunters – they can’t navigate or find prey at night time!  Many shark species can sense light and can adjust to different light levels.

However, the ability of a specific shark species to adjust varies according to its habitat or region – some sharks can see in dimly lit waters while others can only hunt during the daytime when there is more sunlight.

How Do Sharks See In The Dark and In The Day?

Well in the ocean,  it can be very dark, so sharks need to have the ability to see in low light. They can also see during the day and even at night time because they can sense body heat from animals nearby. So think about it: Sharks can’t exactly rely on their eyesight for hunting since it’s quite limited and don’t forget that water is a huge factor too!

At the night, sharks can use another sense known to scientists as a lateral line can be very useful. Sharks can detect the movement of fish nearby by sensing the tiny vibrations in the water caused by these creatures’ muscle contractions.

In addition, sharks can also rely on their ability to sense body heat from animals nearby and electromagnetic fields which are properties that allow them to sense the tiny electrical currents generated by animals such as fish and can detect their movement.

In the day, sharks have good eyesight and can see just fine. They can also use the lateral line to detect movement from animals in their environment too.

What Colors Can Sharks See?

Sharks can see color, but their color vision is not as good as humans. Sharks can only see certain shades of red and green (it’s actually kind of similar to being red-green colorblind). However, they can still differentiate between very different tones which means that even if the fish looks grayish to us, the shark can still see it.

The transparency of water can also affect how well sharks can see color because even though they can only detect certain shades, that doesn’t mean that colors disappear completely. So when you are in the ocean and notice everything looks blueish or greenish- try not to worry too much!

Also read: Do sharks have tongues? Do they have taste buds?

Fact #2 – Sharks can use their lateral line to detect the movement of animals in the environment.

Fact #3 – Though they can’t exactly rely on their eyesight for hunting, sharks have good eyesight during the day times too.

Fact #4 – Sharks can sense body heat from animals nearby and electromagnetic fields that can detect the movement of animals in their environment.

Fact #5 – Sharks can see color, but they can only see certain shades such as red and green.

Fact #6 -Sharks can sense body heat from animals nearby and electromagnetic fields that can detect the movement of animals in their environment.

Also read: Do sharks have bones? The answer is really shocking!

Sharks can detect body heat from animals nearby and can sense electromagnetic fields which can be very useful when hunting at night, during the day, or in low light conditions.

They can also differentiate between tones of colors even though they can only see certain shades such as red and green, but that doesn’t mean that colors disappear completely.

Sharks can also see in front of them, but can rely on their lateral line to detect movement from animals nearby too!